In fall of 2014 I decided I wanted to raise some dual-purpose chickens.  The main focus was on incubating my own birds to raise as “panfrys”, traditional meat birds frequently used in pan frying.  So I needed a coop.

Using some pallets and leftover materials from my shed, I was able to build a nice A Frame coop for about $150.  It has 4 nesting boxes in the rear with outside access and perching poles on either end. 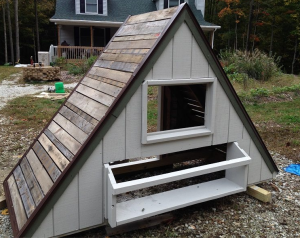 I wanted it to be fairly easy to move, but it’s really heavy.  I guess that’s is good so it doesn’t blow over since it’s narrow.  So far, the best way to move it is by dragging it across the ground after placing a “skid” under one side.  I attached some extending  wheels from the front of an old rider mower to one end, to the left of the bucket in the picture below.  That helps to move it, but it’s still a chore best done with my compact tractor or the garden tractor.

For Fencing, I started out using cattle panels with chicken wire attached and used zip ties to bind them together.  However, the panels were earmarked for my chicken tractor , were heavy to move, and expensive.  I only use a couple leftover 8′ sections now.  The rest of the fencing is step-in stakes and 36″ chicken wire attached to them at the bottom and on the top clip.  So far it’s been  enough to keep the birds in place.  They get locked up at night, so I don’t need the fence to keep predators out.  It’s fairly easy to move by un-clipping each stake and rolling up the chicken wire.