In fall of 2014 I decided I wanted to raise some dual-purpose chickens.  My focus is on a breed that lays good eggs which can be incubated to raise “panfry” broilers, pre-Cornish-Cross size meat birds.  So, how do I provide supplemental light for consistent laying?

The 3 breeds I’ve raised so far,  Buff Orpingtons, Delaware, and Rainbows, are sensitive to the amount of “daylight” they get in relation to egg laying.  In the seasons when the days are shorter, they stop laying.  I’ve heard some breeds are not as sensitive and will keep laying, but these breeds slowed down and almost stopped on me before I added light to extend their “day”. 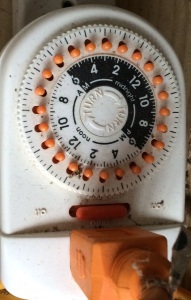 Since I do want year round laying, I have to supplement the daylight with artificial light.   When the coop is near an electrical outlet, it’s easy enough to use a standard multi-time timer to power a CFL bulb in the coop.  However, we normally only bring the coop near an outlet in the cold part of winter and the birds still need supplemental light in the fall and spring when no outlets are near the coop. 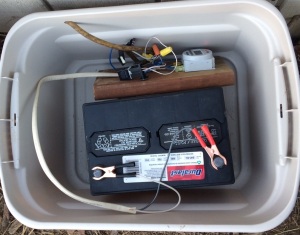 To solve this, I built a DC light box.  For the light,  I ordered a 12VDC LED bulb that plugs into a standard receptacle.  I took the plug off a hanging lamp and stripped the wires to attach them to unit.  I purchased a $10 DC timer that has 16 programmable on/off times.  And I alternate deep cycle batteries for the power supply.

I followed the instructions to hook up the timer; however, the switch on the timer wouldn’t handle the amperage of the light if I ran it through the timer switch.  So instead, I ran a car relay off the timer switch and wired the light through the relay.  I added a fuse in as well, mainly because I already had the female spade connector cramped on and also wanted an easy disconnect in that spot anyway.  It may not be pretty, but it works.

To run the light into the coop, I disconnect the lamp wire and feed it through a hole I drilled in the coop and another hole in plastic tote that houses all the electronics.

This setup works pretty good.  I have two light cycles programed, one in the morning and another one at night.   I can get at least 5 days off one battery charge running 4-6 hours of light a day.  Below are the descriptions and links to the bulbs and timer I used for your reference.