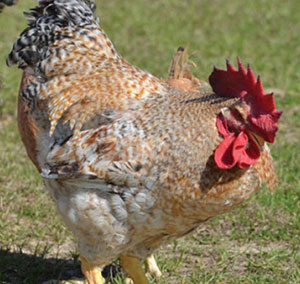 In fall of 2014 I decided I wanted to raise some dual-purpose chickens.  The main focus was on incubating my own birds to raise as “panfrys”, traditional meat birds frequently used in pan frying.  So where do I go from here?

So the questions I still have are what breed(s) do I want to continue working with and what size flock do I want.

For the breed, I’m not done trying different breeds.  I’m still looking for meet and eggs.  I’ve read that modern breeders are mostly focused on ‘show bird’  traits of the bird’s breed, and not on the functionality of the bird, such as egg production and size.  So, this year, I’m going to try buying my dual purpose birds from the hatchery I use for the meet birds.  The breed is called Rainbow and no two birds look alike.

As for the size of the flock, I’m still undecided for the long run.  A lot depends on where I want to go with these birds.  I think this year, I’ll stick to my a flock of 9-10 plus a rooster.  That way I won’t need to build a bigger coop.

The flock size brings us to the main question we get asked. “are you going to sell eggs”.  The answer is I don’t know.  It’s a possibility; however, this year it’s definitely going to be along the lines of a “when available” adjunct to us selling our chickens.  If we build a bigger coop, incorporate some egg only breed(s), and figure out some portable lighting for the coop, I’ll look more seriously at selling eggs in the future.

In fall of 2014 I decided I wanted to raise some dual-purpose chickens.  The main focus was on incubating my own birds to raise as “panfrys”, traditional meat birds frequently used in pan frying.  So how did the “panfrys” do?

They were good foragers, which IMHO adds to the taste.  I don’t have hard numbers on how much they foraged vs feed,  but they were very light on the feed compared to normal meat birds.

One limitation is that I averaged 20 chicks per incubation cycle.  Since I don’t do a lot of processing myself and the processing place is 70 miles away, it’s better to have larger quantities.  It’s feasible to raise two cycles together; however, to get a minimum of 3lb dressed weight, the older cycle will be 19 weeks old.  Roosters fights may be a problem at that age.

I plan on continuing research into the dual breeds for meat.  Three pounds is an ok size, especially for a tasty bird.  Hatching our own birds cuts out some costs and I’ll work harder next year to get good numbers on the feed ratios to determine what the actual costs per pound are.

4 I decided I wanted to raise some dual-purpose chickens.  The main focus was on incubating my own birds to raise as “panfrys”, traditional meat birds frequently used in pan frying.  Now I want eggs.

In between my incubation sessions, we were getting 6-7 eggs average a day from the 9 hens.  We had built up  a rotation of almost 8 dozen eggs in the fridge when we started having issues.

First I noticed some eggs were broken.  I determined it was a chicken pecking eggs, but which one?  While I was trying to figure out how to catch the egg eater, first one, then two of the Buff Orpington hens went broody on me.  At first they were in the nesting boxes, but as I kept kicking them out of those, they took up corners in the coop.  I managed to dissuade one of them by continually kicking her out, but the other was to stubborn.

In the mean time, I thought I had found my egg eater.  I saw a Buff running around with a broken egg shell.  I separated her, but by now between the broody hens taking all the eggs and the egg eater we were only getting 1-2 eggs a day.  This went on for almost 6 weeks while I “studied” the birds and waited for a chicken tractor to be freed so I could start isolating the birds to get to the bottom of what was going on.

The Buff I separated wash sharing the tractor with my dual-purpose meat birds.  However, she was rejoined the flock after two weeks as the loss of eggs had not lessoned and she started laying in the tractor without pecking the eggs.  The birds that were in the tractor with her graduated, but we restocked the tractor with Brother’s M chickens and I did not want to the layer hens with the Brother’s meat birds.  Finally we emptied the chicken tractors; however, we were leaving for vacation in a week.  I didn’t want to complicate things for my caretaker, so almost two months passed with little to no eggs.

When we returned from a vacation, I immediately separated the Delaware and Buffs by putting the Buffs in an empty tractor.  Within a week the buffs started laying 2-3 eggs again while the Delawares produced none.  So I started introducing Delaware hens with the Buffs to identify the egg eater.  The first one I introduced ran past me and started pecking the Buff eggs as I was trying to gather them.  Found her!  The other two were introduced 3 days apart and we did not loose any more eggs.

But now, I was losing daylight and the birds were not laying well.  I moved the coop up by the house and installed a light on a timer.  Production picked up, until… more pecked egg.  This time I noticed a Delaware hanging out in the coop and separated her.  No missing eggs for a week.  Then …. More pecked eggs.  I took the third and last Delaware out of the flock, one had disappeared during the summer, and now had just 5 Buffs.

Months later and still no pecked eggs.  The 5 Buffs are producing an average of 3 eggs a day.

In fall of 2014 I decided I wanted to raise some dual-purpose chickens.  The main focus was on incubating my own birds to raise as “panfrys”, traditional meat birds frequently used in pan frying.  So I need some chickens.

After doing some research, I decided to try 2 breeds, Delaware and Buff Orpington.  I was really partial to the Delaware breed as they were initially bread to be a meet bird, but were quickly overshadowed by the current Cornish-X breeds.  However, I’d raised some Buff Orpingtons the year before.  I liked them so decided to try both. 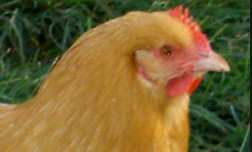 I purchased 4 hens and 2 roosters of each, along with 2 guinea hens that I also wanted for hatching eggs.  That gave me 8 new layers, plus and extra leftover Buff hen from 2014.  Having two of each rooster would allow me a chance to choose a well behaved rooster of either breed.  By spring I had decided to keep a Delaware rooster based on  having local resources to get more Buffs and the desire to really give the Delaware breed a try.

In early spring, the guineas decided to gang up on a hen.  Ganging up is apparently typical behavior for guineas, but given my limited number of hens, I was unwilling to risk losing birds so the young guineas became dinner.  I local store also started carrying guinea chicks to replace our dwindling free range flock, so I wasn’t too concerned about not having eggs for hatching.

So by the end of spring, I had my established flock, a Delaware rooster with 4 hens and 5 Buff hens.  I was ready to hatch some eggs.