To me, easy to move means on a well-balanced trailer.  Chicken tractors are great, but I wanted more substantial winter protection than a tarp, which means more weight and harder to move.  I was gifted this frame(1) for this project.  It was pretty ruff, so I used a wire wheel to clean it up.  While knocking off the rust, I could tell it was once blue, so Rustolem deep blue it was.

I wanted to keep the center of gravity low, so a tall coop was out.  Additionally, I had several 4′ wide pieces of wood panels that were around 30-36″ tall.  Keeping the maximum height of the coop to 4′ in the front allowed me to use these scrap pieces and only purchase one 8′ panel for the front two sections, the trailer is 8’x3.5′. 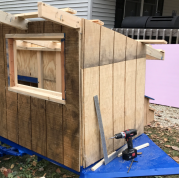 The low height meant two things.  Plenty of access from outside so I don’t have to go in and a remove able floor so if I do, I gain another 18 inches by standing on the ground.  Initially I planned on removable external nesting boxes and each end as a door; however, it was easier and less time consuming to semi-permanently attach the nesting boxes.  I’ve held off on adding a door on the tongue end of the trailer.  It’s bent upward, presenting complications with a full door and is also the best place to put the battery.  I’ll look at adding a smaller door later. 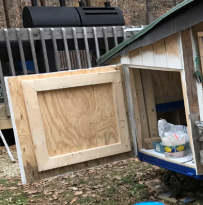 Lacking removable boxes and the 2nd door, I decided to make the windows access points instead; this will work out well when I need to remove birds while sleeping on the perch.  The windows were always going to be hinged at the top so they can be opened out and not let rain inside, so that access was covered.  However, instead of a fixed hardware cloth screen for the windows, I’ll make hinged screens that open giving access to the birds inside. 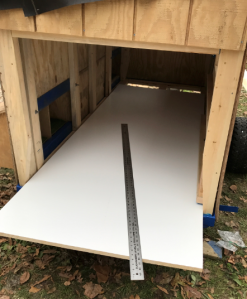 It has to be easy to clean and for that  I’m a big fan of open bottoms and poop boards.  Both are relatively easy to clean.  A mesh floor to let the droppings fall through is the ultimate goal, but after seeing the shape the trailer was in, I don’t want to encourage more rust by letting droppings fall on my new paint job.  I plan to mitigate this by covering the undercarriage cross members with corrugated pipe for protection and possibly easier clean-up.  Then I’ll build a frame and cover it with 1/2 inch mesh for an ‘open bottom’ floor.

However, to save time this fall, I went with a cheap solid floor.  I picked this piece up for $5 in the damaged section, since it was damaged on the sides and I didn’t need the entire 4′ length.  It’s slick surface allows me to easily scrape it clean with a rake.  To get a better clean, or to get inside the coop, it’s removable.  The mesh floor will be removable too when I build it.

(1) Footnote: My father-in-law deserves big thanks and recognition for donating parts to this build.  He donated the trailer and windows in this post.